In this guide you will learn how to set up your own VeChain Thor node that can connect to main or test net. For this, we will be using Docker and assume you are running a Windows OS.

An open-source project that automates the deployment of software applications inside containers by providing an additional layer of abstraction and automation of OS-level virtualization on Linux.

In simpler words, Docker is a tool that allows developers to easily deploy their applications on any computer, without having to worry about the Operating System or system settings of that computer.

What it means for us, is that with Docker we can get a VeChain Thor Node and all of its dependencies up and running by simpling deploying a Docker image. So let’s go and get started by setting up Docker!

Create an account on Docker.com and once logged in go to the docker store to download the Docker Community Edition for Windows install file. Once downloaded launch the installer.

Once restarted start a Windows Command Prompt by hitting your Windows + R key and typing cmd.

You should see the following message if you installed docker successfully: 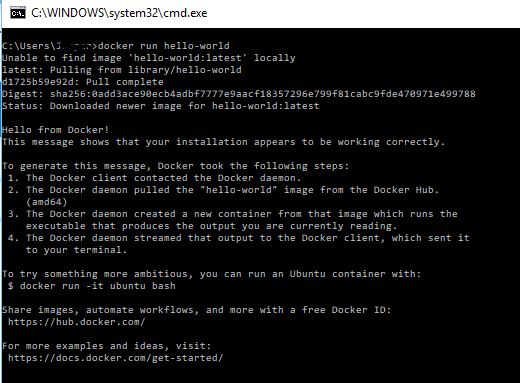 First we download the latest VeChain Thor docker image. This Dockerfile is designed to build the last release of the Thor source code and will publish docker images to dockerhub with every new release.

Once you have pulled the docker image we can run our vechain node by running:

The following commands and options are supported:

Step 3: Run Thor and connect to the API

Use the following command to start a container called mynode, that connects to the main network and allows you to browse the API by going to 127.0.0.1:8669 in your browser.

We will dissect this command now:

If you want your node to stop running you can run the docker kill mynode command.

How to send a VET transaction using Connex

How to run your own VeChain node on Amazon Cloud