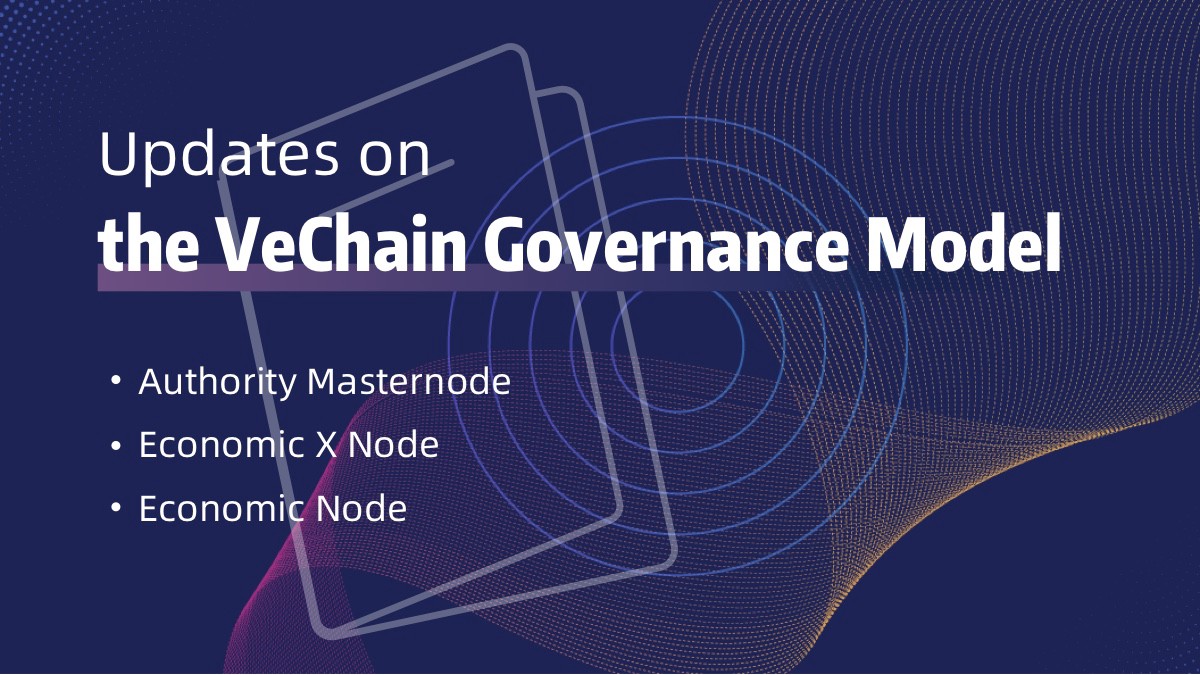 On December 6, 2019, the VeChain Foundation that’s responsible for the governance and development of the VeChainThor public blockchain announced their plans to introduce an updated governance process charter for the blockchain, aiming to increase the decentralization of their PoA-based governance.

The proposed plans involves giving away the majority voting weight and authority back to the community, with as much as 60% of the total weight allocated to dedicated holders of the VET cryptocurrency that chooses to opt in to the Economic Node and X node system of the blockchain.

Essentially, any VET holder who owns an Economic or X node will gain the ability to vote in governance changes and development plans of the blockchain.

The plans also include the ability for community-nominated Steering Committee members during the election, and the charter specifically states that there must be 1 independent member (defined as non-VeChain Foundation or partner affiliated person) in every sitting Steering Committee.

The remaining 40% of the voting weight will be allocated to Authority Masternodes holders comprised of various enterprises, government authorities and developers, which validates and generates blocks in the VeChainThor blockchain. All voting will be held using the newly launched VeVote platform, a decentralized voting platform that will be used moving forward.

At first glance, one might be wondering the significance of this announcement, and how it relates to the average VET holder. There are a few reasons why I think the updated governance charter should be celebrated by everyone in the blockchain community.

The Steering Committee is a very powerful entity in the VeChain ecosystem as they pull the shots in the background, with very little fanfare and attention. It is often ignored and taken for granted as the community focuses more on partnerships and accomplishments of the VeChain ecosystem.

Prior to the updated governance proposal, the Committee and Foundation has been elected and run internally with 0 community input. Development and direction of the ecosystem were made solely at the discretion of the Committee and Foundation, and coupled with the PoA consensus of VeChain, critics are not completely wrong that the VeChain blockchain is more centralized than not. It all changes with the new governance process.

Now that I have established the fact that the community now holds the key to the blockchain and why it is important to have that power, now another question arises. What do I do with this power?

The answer is very simple and straightforward. Every VET Economic and X node holder now decides on the future of a blockchain adopted by Fortune 500 enterprises and various government authorities around the world.

For those that are unaware of the accomplishments of the VeChain blockchain, then let me put it out there on record: VeChain is the world’s most adopted public blockchain platform. From governments to massive Fortune enterprises like Walmart and assurance companies, VeChain’s adoption directly overshadows other blockchain platforms. For example, assurance and auditing giants PwC, Deloitte and DNV GL actively develops and uses the VeChain blockchain, selling it to their enterprise clients. Governments such as the Shanghai Government, Yunnan Government, San Marino Republic, Republic of Cyprus and more runs dApps on VeChain.

Thus, owning a Economic or X node gives you the key and voice to decide on matters that will be adopted by all of these enterprises and governments. This is unprecedented in the blockchain and tech community, and it should be a very exciting opportunity to wield such a power. This is community-based governance at its finest.

Community Interest’s the name of the game

The above two factors boosts the decentralization of the blockchain ecosystem considerably. With the power to elect Steering Committee members and the ability to nominate independent members to the committee, it pressures the Foundation to put the community first in its development agenda.

This means that VET holders that are invested in this ecosystem should actively try to own a node to directly make their voices heard, in a meaningful way.

Election campaigns and voting proposals should be scrutinized by the community and I expect community movements to sway votes based on elaborate and well argued debates and roundtable meetings.

X nodes are the most attractive status the community can now get with 40% voting weight accorded to them. This is the best time to scout out for some X node tokens on the VeChain Node Marketplace if you truly care about the future of this ecosystem. I also foresee an immediate increase in demand for X nodes as the blockchain ecosystem matures further, especially when more dApps by enterprises get deployed.

Imagine this example: Its the year 2021 and VeChainThor is now a household name in the blockchain community, and news and media websites are reporting that new enterprises are adopting VeChain every other week. The most prominent adopter of the blockchain includes IBM, Microsoft, Apple, Google, and more. They are authority node holders and are significantly invested in this ecosystem. What do they do if they are unhappy with their 40% voting weight and VTHO generation for transactions?

The answer: They will look towards getting X nodes for that sweet 40% voting weight and extra VTHO generation. Now what happens to the price and demand for X node tokens on the market? The answer should be obvious.

Economic nodes are also meaningful with 20% voting weight. Given that Economic nodes are freely obtainable as long as one obtains the VET collateral needed for them, 20% is a fair amount. This also means that individuals that are interested in making their voice heard should aim to hold at least an Economic Strength Node (1 Million VET).

Being able to vote is fundamental to every democratic movement and it empowers and incentivizes activism, and with the amount of power that the VeChain Foundation just decided to give back to the community, we can be confident that they won’t let the community down. After all, if they do let us down, surely we can reject their candidates and replace them with people who care about the community during elections.

This article written by Fatalexe was first published on Medium and republished with the authors permission.

Is Blockchain an empty buzzword? Case studies says no

Calling all @vechainofficial fans! Today I got to sit down with CEO @sunshinelu24 to discuss partnerships, progress & their 2020 outlook. Enjoy 😃 $VET $VTHO https://youtu.be/GU0a2gB_kS0